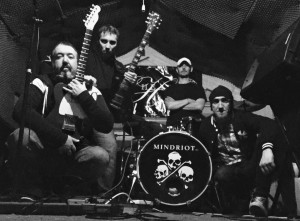 Mitchelstown’s MINDRIOT have followed up on last years successful self-titled “Mindriot” EP and acclaimed music video for it’s lead track ‘Low’, with two brand new tracks, ‘Runaway’ and ‘Scream’, both recorded once again with engineer and producer Ciaran O’Shea (former CYCLEFLY vocalist) at his Middleton studio, who they worked with on the self-titled EP. The tracks are to be included in the bands upcoming new album later this year.

‘Scream’ has a KERBDOG/WILT feel to it and is definitely the safer of the two tracks. It’s also the bands choice for lead single ahead of rest of the albums planned recordings, but it’s ‘Runaway’ that’s the real winner, to these ears! An infectious bouncy number that will have your head nodding away happily and your foot tapping along without even realising. As expected the tracks are instantly catchy and the chorus’ are very simple one line repeaters much like the previous EP, which is something I had hoped the band would try and expand on. Still though! There’s a lot of potential and appeal for a band of MINDRIOT‘s calibre, so fingers crossed the band can build on and explore more ideas for the next session of album recordings.