It is a tough choice for many new and young bands to decide on which path to embark on when setting forth on their career. There are not too many, if any, new genres that have yet to be explored in terms of sounds. Anything that is proclaimed to be new and fresh is generally a fusion of movements that have gone before. And by combining one or more than often result in a turd pie. Metal Hammer and publications of that ilk may wet themselves over a particular band only for an elder states-person to proclaim in bored expressions, “It’s been done”. Sometimes you have to be upfront with the sounds that have influenced you and to do it justice. If it is a genre which has been out of the spotlight for quite some time, and has recently seen an upturn in appraisal, more the better.

And it is with this dilemma in mind, that we introduce VENDETTA LOVE. Forming in County Laois in 2014, they have decided to pursue the route of the alternative sounds that sprang up ‘pre’ and ‘post’ grunge. Combine that with the more modern hard rock bands of the 21st century, and you have an idea of what you are dealing with. Laois might not be the epicenture of rock ‘n’ roll but they have not let that stop them. Since their establishment, they have been extremely busy across the country spreading their word. This has been supporting more recognisable bands, cover bands or shows by themselves. To make yourself known, you sometimes have to take whatever opportunity is available. There is a time whereby you have to stand on your own two feet however. And this debut EP is necessary to do that.

Opener ‘Ode’, contains thick and chunky bass-lines to kick off with. I have been informed these duties were undertaken by Aidan Grey whilst they were seeking out a new permanent member. A riff pops up that almost sounds like ‘She’s a Waterfall’ by STONE ROSES in its jangly nature. Perhaps I was hearing things. The piece quickly gains weight and pace. The drums kick in to initiate a section of breakneck speed. It contains all the hallmarks of modern heavy rock and post-grunge. Bands such as GODSMACK, THEORY OF A DEADMAN, STONE SOUR, HINDER, LIVE and others.  It also channels the sleaze and dirt of bands like BUCKCHERRY.  Shawn Mullen’s vocals aim for the likes of Layne Stanley and Chris Cornell but also the raspy sense of Kelly Jones of STEREOPHONICS. The playing is solid without being overly flashy. This, and the vocals, falls away to leave a slower and tougher segment dominated by riffs, drums and sneering vocalisations. It kicks back into the familiar style yet again. The main players lock together led by an impressive guitar solo. It is pacy, melodious and varied. The vocals reappear before crashing to a conclusion. ‘Follow Me Down’ has a fast tempo out of the blocks. It transforms into a slow, pounding section led by the drums and bass. The vocals are low down and gritty. The Seattle influences definitely coming to the fore. Effects seems to cloud them in echo and reverb. They almost have a feel of Dave Mustaine at times. Tight, nifty riffs are fueled by steadfast drumming and athletic bass-lines. A squealing guitar solo carries us into another instrumental section. It can be a bit O.T.T at times but it is well performed. A couple of drum fills are thrown in for good measure. Finishes off with more guitar work shining through. 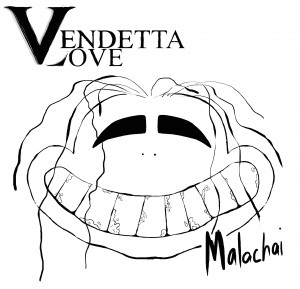 ‘Chains ‘N’ All’ is full of deep and hefty riffs to begin with before the drums join the fray. A low-down and positively dirty bass sees the introduction of the vocals. The bass is heavy enough to knock walls at this point. The drumming is solid and to the point. In service of the mood in question. It is another grunge influenced number. The vocals are more of a low and gritty nature rather than incorporating screams. It switches to an instrumental piece driven by the guitar and drums, with the bass coming through intermittently. This leads to another high tempo guitar solo. It perhaps bears more resemblance to the eighties hair metal scene, rather than the toughness of the alternative movement. Closer ‘Hush Hush’ starts with a slow and carefully plucked guitar and bass which has the sense of ‘Nothing Else Matters’ at times. The vocals appear and they are of the world weary and love-lorn disposition. Drums begin to make their presence felt more but the tone generally remains dark and downbeat. Nice thick bass-lines on show though. The playing keeps up to a high standard throughout and this is emphasised by another fluid guitar solo. It doesn’t really go anywhere from there however and it finishes on somewhat of a damp squib.

The band are clearly not inventing the wheel. Nor are they claiming to either. This is essentially no frills, stripped down heavy rock. Anyone tuning in expecting to hear multi-layered vocals, mathematically incomprehensible chord patterns and time signatures, dueling organ solos over twenty minutes or obtuse themes will be disappointed. They also do not engage in frenetic blast-beats, demonic vocals or lyrics about killing and torturing. There is a darkness in terms of atmosphere but that is as far as it goes. What they provide is passion and guts. It is not perfect however. The switch in tone can be a bit uneven at times, the vocals can be a touch generic at stages and there is a sense they are operating within a comfort zone. The promising sign is that there is a lot more to come from them. This is merely a starting point and where they go from here is up to them.

In the meantime, they were able to announce the arrival of a new bassist in the guise of Colin Dunne and have recently competed at the Bloodstock Metal to the Masses competition. And I’ll bet you can expect them to be rather busy elsewhere away from that. They would be ideal to check out at an event such as Siege of Limerick or elsewhere. A few pints, enthusiastic crowd and a band offering decent, solid rock. Sounds like a perfect combination to me.