The second album can often be considered the toughest of a bands career. With their debut, those involved usually had a significant amount of time together to develop the material. It is often considered to be the distillation of their life’s experience and influences so far. Gigging and touring will have built up an eager audience for this release who have been experiencing these songs at every show they have seen. It is basically a case of getting your best written, most popular and extensively rehearsed songs together and putting it on an album. This is why many band’s best album is their very first. The pressure is on to not only match it, but exceed it. The rush is on to get another set of songs written and rehearsed. To use older songs left off the debut will face accusations of using leftovers. To replicate the style can instigate the rumble of treading water. To take on a completely fresh sound may face the risk of alienating their original fans. It is not known as the sophomore slump for nothing. And this is the challenge faced by our subjects here with “Twisting The Blade”.

STEREO NASTY began when a couple of friends, Adrian Foley and Mick Mahon, were messing around in their spare time. Their love of eighties heavy metal came to the fore above all others. Having decided to test the waters for it, a self-titled demo was released in 2014. The stir created by it ensured a promising future for the project. To fulfill their hopes of an active band, Derek Holohan and Fran Moran were added on bass and drums respectively. Frantic touring and a serious work ethic led the way to their debut album in 2016. It was a breath of fresh air. It provided a massive nostalgia kick for those who grew up in that era or those buzzing from the likes of Stranger Things. They had the sound and the aesthetic down to a tie. The Road Warriors meets W.A.S.P.  Spikes, leather and a whole lot of attitude. This led to festival dates at home and abroad in light of all this. But now how do you follow that up?

Opener, ‘Kill Or Be Killed’, is right back into familiar territory. It is proper anthemic in nature. A faintly spacey and trippy opening sees a hum of electronics. This is audible temporarily before sharp, heavy riffs collide with abrupt drumming. It maintains the heavy/speed metal approach from before whilst keeping that melodic sensibility. Nods towards the likes of METAL CHURCH, ARMORED SAINT, LIZZY BORDEN, DOKKEN, LEATHERWOLF and more. The vocals appear and Mahon retains the same sense of power he is known for. Gritty and threatening at times. Think Udo Dirkscheinder, Blackie Lawless, David Wayne and Paul Di’Anno. The chorus seems designed for crowd participation. Its title is repeated by Mahon, before a call and response from the backing vocals. A brief guitar solo is heard aided by the drums. This subsides before a classic, melodic piece from Foley bursts through. Classic in both feel and sound. Mahon is pushing his voice to the very limit as the tension is heightened. Throughout the drumming is consistently solid, with neat little fills appearing here and there. No real let up in power to the end. ‘No One Gets Out Alive’, features slow, meticulous and repeated riffs over a steady drum beat. Vocals are low and dirty sounding. In the style of barked out lyrics to command the listener to obey. The drumming courtesy of Moran is on the button. A nice semi-operatic vocal style is employed on the title. It switches back to the slow riffing from before with a palpable sense of danger in the atmosphere. This leads into a rising, layered solo. Shimmering, varied and destined to be used by air guitarists whenever they play this live. The vocals change to a chanted repetition in call-and-response style. The style is kept up to the end complete with a raspy scream. 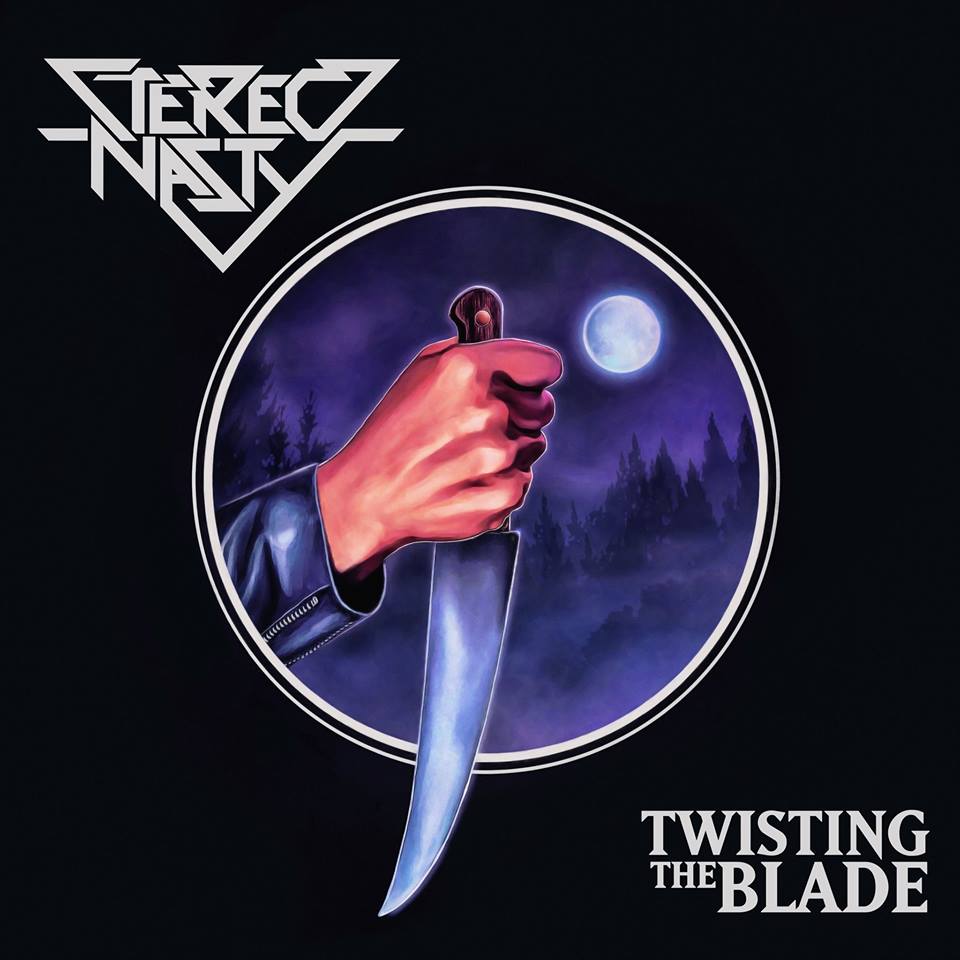 ‘Reflections of Madness’ comes straight out of the blocks with thick bass-lines, insistent drumming and razor sharp riffs. Definitely more of a thrash element to it and the vocal style matches this wonderfully. Being tough, lean and passionate. Lovely melodic reverb laden guitar lines by Foley crop up around the chorus, appearing at various different points throughout. The drumming is powerful throughout. It is lightning fast but does not skip a beat at all. The vibe is tense and uneasy. It screams of a future imagined in a dystopian 80’s movie. Not that it is subdued however. A few screams are unleashed over some pacy riffs before delving into a full blown solo, backed by the drums and bass. It shows a massive amount of confidence in their ability and a clear example of progression from two years ago. ‘Near Dark’ is a bit more of a simplistic number in comparison. It does, however, contain an opening driven by the drums and especially the bass. Great to hear it being pushed forward and credit to Holohan. It is defiantly low and heavy. The guitar joins the scene. The vocals keep to the eerie sense of atmosphere that seems to come straight from a slasher flick. A full, balls-out solo swoops and rises to help break the strain backed up by strong drumming again. The vocals re-appear over a backdrop of snares and guitars. They get increasingly unsettling as the prophet-like delivery progresses and the playing crashes away.

The longest track makes its appearance in the guise of ‘Through the Void’. It features an acoustic and melancholic opening with the only instrument being a delicately plucked and strummed guitar. The vocals are pained and sorrowful in response as they weave their tale of ill begotten woe. There is plenty of raw emotion to the often raspy style. The power ballad of the album but mercifully it bears more to ‘Sanitarium’ than ‘Every Rose Has its Thorn’. Some snares begin to make themselves known before it gains in strength. The vocals gain in power to that of a scream. The wistful atmosphere returns again, albeit with more percussion on display. Not a band losing their testosterone however. A tougher section appears again leading to an extended instrumental piece complete with a more restrained guitar solo. A series of heavy riffs leads into a flat-out segment with thunderous drumming and solid bass-lines. There is slight repetition at times but when the playing is as high quality who can really complain? Some killer drum patterns in there particularly. The vocals show up again after a while and they are also of a tougher variety. A widdling guitar solo by Foley leads the drums and bass on a merry dance. Chanted vocals with more call-and-response sets the tone for it all. Zero restraint being shown here now. A repeat of the bruising instrumental finishes it off in style.

‘Haunting the Night’ does not wait around at all. Lightning fast riffs and rock solid drumming lead the way. The vocals arrive and it continues on in a similar vein for a while. Suddenly, a drum dominated section switches up the tone. The vocals develop more of a militant and strident like tone. These switch up to more of a call and response style briefly before reverting back again. Foley and Holohan perform commendably on these backings. The playing is kept to a high standard with a few sharp, tight riffs set against a set of isolated drum beats. This develops further to a full blown duel between the guitars and drums. The pummeling style returns on the drums with a tougher feel and sinister air on the vocals. Definitely hidden complexities on show that some may not give the band credit for whilst keeping up the energy levels. The albums title track opens like a cassette crackling on a low grade tape deck, which many of us old farts pine for. It quickly reverts back to the present day with riffs and beats aplenty. There is considerable menace to the vocals, especially when the title is called out. The playing does get slightly repetitive at times and surprisingly restrained for much of it. The vocals are absolutely bang on though. A snub to anyone who critiqued Mahon for his delivery. A few nifty licks are peeled off against a thumping drum beat. It injects a degree of verve back into the piece which ends up somewhat abruptly.

‘Vengeance’ has a completely different atmosphere to what has gone before. It is decidedly more of a sci-fi vibe and entirely instrumental. You could almost imagine it to be part of the score for a slasher flick or video game. You could almost expect to see John Carpenter or Dario Argenti attached to it. And ties in with the whole lyric themes from the band here. They are not called STEREO NASTY for nothing after all. And it has to be said, the themes discovered are more on the sinister spectrum. It is slightly curious as to where it lies in the album however. One might expect this to open the album rather than towards the end. It seems odd when sandwiched between the two numbers on either side. An interesting intermission nonetheless. The main playing takes the form of a subdued sounding guitar line on repeat with a hefty fuzz in the background. ‘Becoming a Beast’ sees out the album. It has an aggressive, almost punky vibe to it. Already it has proven to be a firm favourite when played live and will no doubt be an integral part of their set. Almost like a rising storm at the very start. Tough and lean riffs are set against a pounding back-beat. As events delve further into a darker atmosphere, a soaring guitar solo lifts everything up again. A flurry of drumming and riffs brings us to a close.

So the question remains….has the band moved on from their first album? Well, yes and no. Certain songs, and sections of other songs, have displayed the band branching out and discovering new sounds. Being adventurous in a way. ‘Vengeance’ is a clear example of that. The drama and gravitas displayed on ‘Through the Void’ would be another. Other songs show neat moments that may well surprise the listener. Upon listening to it for the first time, one might be tempted to consider it a re-hash of “Nasty By Nature”. This is true to an extent. However, is this such a bad thing? While much of the sound and feel is similar, the band are on blistering form. Instead of doing a lot of different tasks, you can hone in on what you do best. Specialisation rather than diversification. And this is definitely happening here. There is a clear confidence and swagger to the band at the moment. The songwriting and playing has been increased noticeably. Some of the riffs would not be out of place from one of their former support dates to. Brian Tatler is/was king of the riffs and he could not fail to be impressed. Much is made of the production work here but it suits their raw and gritty feel here.

It’s been an incredibly busy twelve months for the lads. Continuing to prove a draw wherever they play on the Island here, and spreading their message across Europe through festival dates. Although not much has been announced officially just yet, I suspect that it will prove to be another bumper year for them. From knocking around in the practice studio to playing alongside some of your boyhood heroes; its been an incredible couple of years for them. They have plenty more to give however. Perhaps future releases will employ more of the dark and menacing tone as referenced throughout. There might be more opportunities for clean backing vocals to push themselves forward. In the meantime, get out and catch them if you can. You WILL NOT be disappointed.