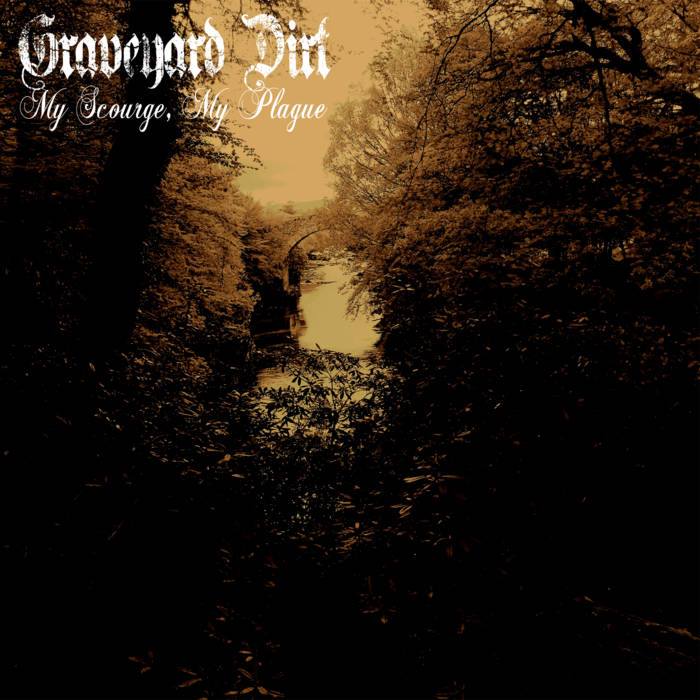 Originally formed back in 1994 and inspired by the early Peaceville doom/death sound, they recorded and released the classic “Of Romance And Fire” demo in the summer of 1995. But the fates conspired against them with the label they had signed to self destructing beneath them which brought the band to grinding halt and sinking into a dormant slumber for the ensuing twelve years. But they emerged once more and picked up almost exactly where they had left off over a decade previous with the release of the “Shadows Of Old Ghosts” EP in late 2007.

While they may not have been the most prolific of bands as regards output down through the years, the quality of GRAVEYARD DIRT‘s sparodic offerings has never been in question. Their style and compositions are slow and arduous, very much like their progress. Yet they have never failed to squarely hit the mark with each release.

“My Scourge, My Plague” is the latest release from the Donegal Doom Titans since their incredible 2010 full length album “For Grace Or Damnation”. The EP has once again been recorded with the one and only Mick Richards at his Trackmix Studios in Blanchardstown, Dublin, who has helped them craft three massive doom tracks that are as elaborate as they are immensely crushing. Variety may be the spice of life, but you want find anything new or wildly different from GRAVEYARD DIRT on the EP.

Opener ‘A poisoned Seed’ and ‘Her Haunting Smile’, which we were treated to back at the end of last May as a first taste, sees the bands trademark mournful tone return once more to haunt it’s listeners as only GRAVEYARD DIRT can do.  And the lengthy ‘The Sirens Refrain’ doesn’t veer too far from their tried and tested formula either. But it’s got more more angst and bite to it at times compared to the previous two tracks.

Each track is littered with intense and heavy riffs, but countered perfectly with an array of melancholic and dare I say… beautiful, guitar leads. It’s as if they’ve managed to recreate the stirring use of violins from MY DYING BRIDE‘s classic early albums but done instead with guitar melodies and harmonies layered perfectly across the tracks. And Paul Leyden’s vocals are suberb throughout! His gruff harsh vocals are clear and forceful, while his spoken passages add to the overall pitiless feel and nature of the music. It’s a style that not many bands can do really well and GRAVEYARD DIRT are one of the few who do it perfectly. And the aura created by all these elements is what really makes GRAVEYARD DIRT stand out. They just do it so brilliantly it’s neigh on impossible to escape it’s captivating gravity.

“My Scourge, My Plague” is available to download from the band now…
https://graveyarddirt1.bandcamp.com/releases

CD copies will available in the coming weeks.