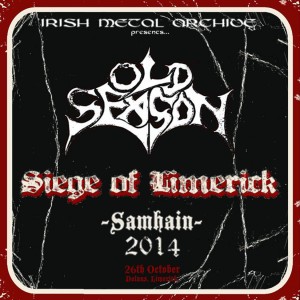 The first of this years Siege Of Limerick festivals is almost upon us! With the legendary SOLSTICE headlining the ‘Earrach 2015’ event.

So to hopefully whet the appetites of those planning to attend, we have a number of live recordings being made available from the last ‘Samhain 2014’ installment of Ireland’s premier metal meeting. First up is OLD SEASON with a few tracks from their mainstage appearance on the day.

Thanks a million to OLD SEASON‘s James Blanchfield and the band for allowing these tracks to be made available. And thanks also to Tall John and Ciaran Culhane at BadReputation Ireland for their help in organising the recordings.