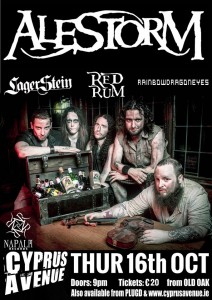 I’ll be completely honest! My main goal at this gig was to meet with and interview (more on that to come another time…) one or both of ALESTORM’s two Northern Irish band members. Except for ALESTORM, I had absolutely no clue what to expect tonight. And even then I’d only been exposed to the headlining bands promo video tracks on Youtube. I was obviously in the minority going by the amount of plastic cutlass, eyepatch, fake shoulder-parrot, bandana wearing, waste-coat clad fans in attendance. Euro Giant must have made a killing earlier in the day.

However! I did make an effort and got my hands on their latest album “Sunset On The Golden Age”, which I have to admit was a lot more enjoyable than I originally expected. Much like the whole Piratefest experience that sailed into Cork Port one this blustery cold Autumn evening. 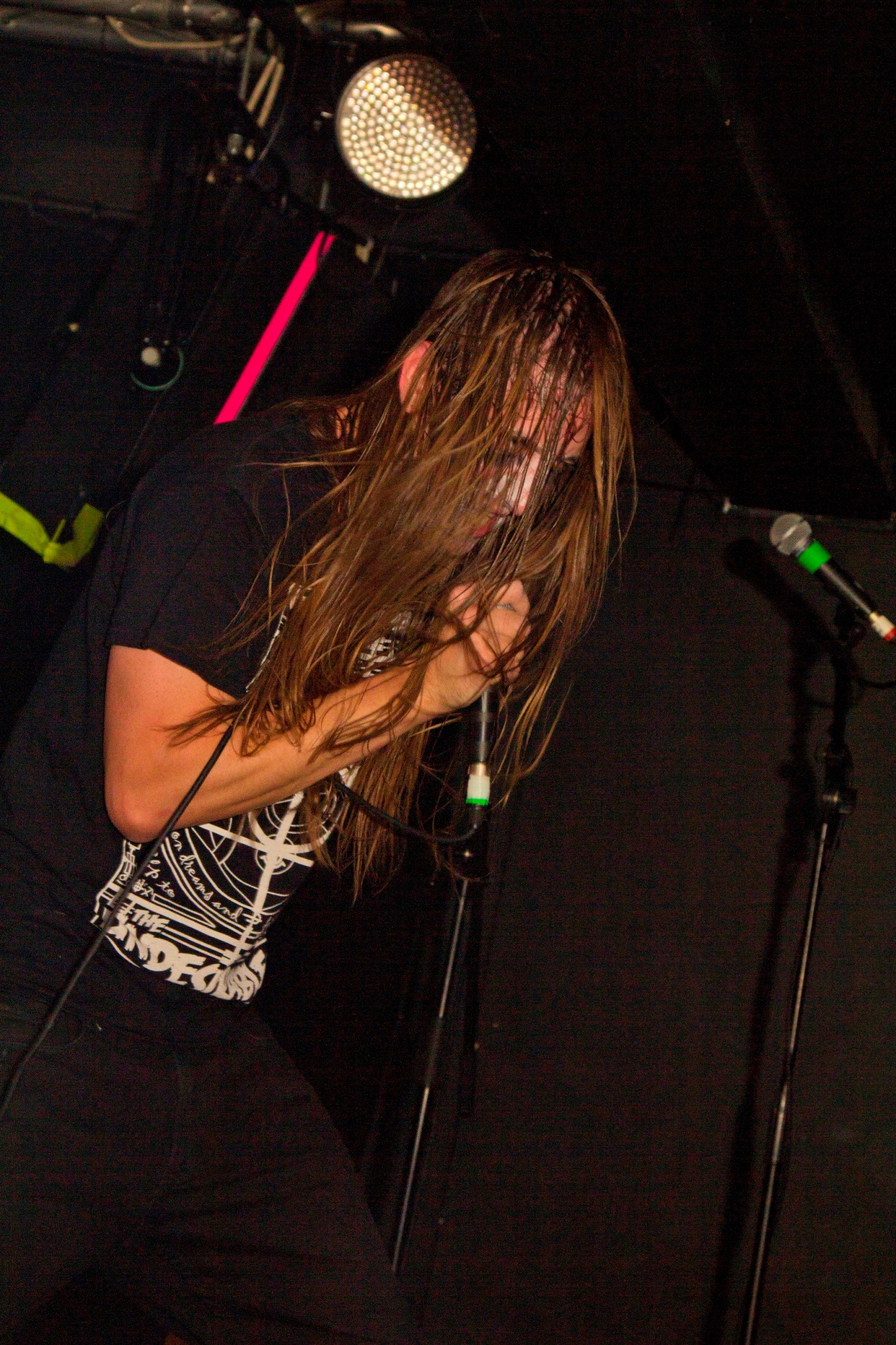 The first performer of the night. And what a performance he put on. No band as such! Just one guy in corpse-paint throwing shapes and doing various metal vocals over backing tracks of his unique 8-bit, pirate themed electro/techno-metal. As much a comedic warm-up than a musical act, my initial reaction was a jaw-dropping “What the actual FUCK is this shit!!!”. But in fairness to the guy, he’s a born entertainer with a very likable and very funny personality that won over the early revilers in no time at all… myself included. I never in my life had heard of or ever expected to witness an 8-bit circle-pit, but thanks to RAINBOWDRAGONEYES my horizons have been broadened on that front. 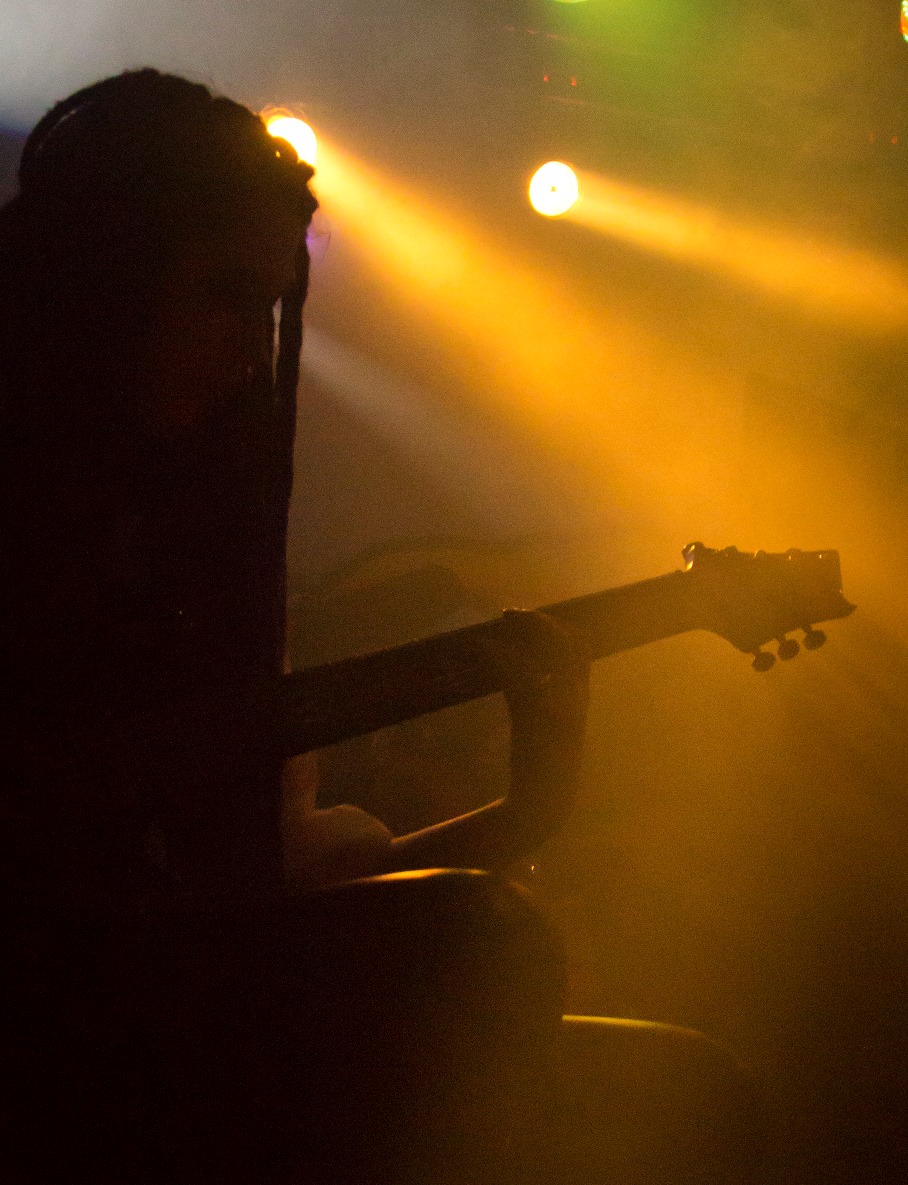 An added bonus to having a one-man opening act meant he had next to no stage gear, so when it was time for him to make way for RED RUM, the change-over was nice and quick. Now! RED RUM are whole different animal. First of all… they are full band. Hurray!!! Stage space is pretty cramped with a good chunk of it taken up by the headliners rather impressive drum kit, but all six members of the land-locked Nottingham based band manage to fit on stage as they launch into their own brand of Pirate Power Metal meets Lord Of The Rings. Guitarist Bekkie Brumby was a welcome sight in a sea of testosterone as she perched herself on a stool for the bands set. Dave Everitt may have looked like Meat Loaf in a Shrek costume but he gave it absolute socks up front on vocals, inviting the audience to join in and get involved at every turn. 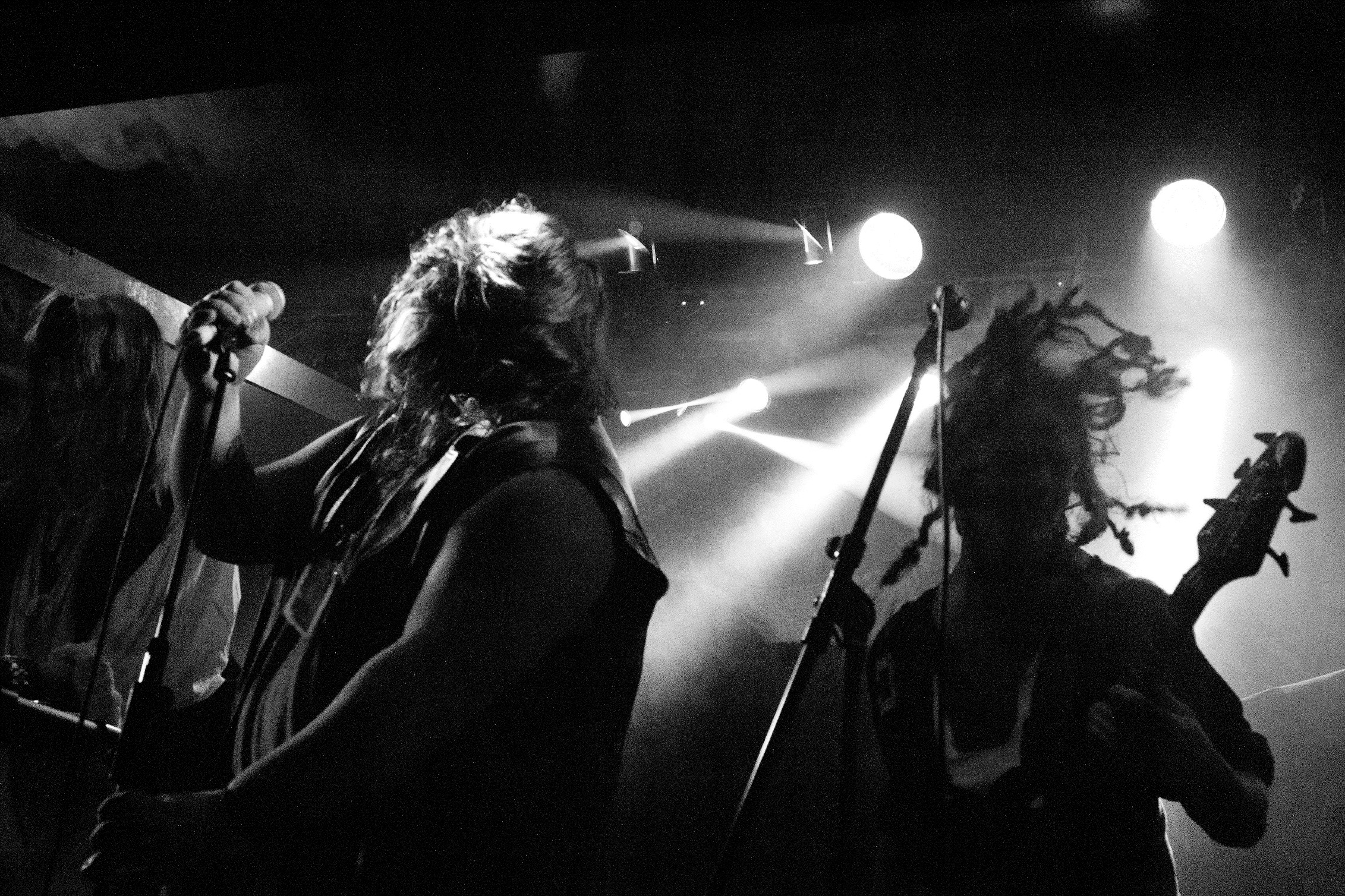 It was obvious that the band are a tad more serious compared to the other acts and really enjoy every second of what they do, as was most evident from bassist Stephen Ryall. Almost completely lost behind Everitt for most of the set, he bounced out from under the imposing frontman’s shadow at every opportunity with the happiest face I’ve ever seen on living human being, relishing in every single note the band played. They still manage to keep in sync with the fun aspect of the tour by throwing in some comedic elements, such as their folk metal version of ‘They’re Taking The Hobbits To Isengard’ youtube parody. 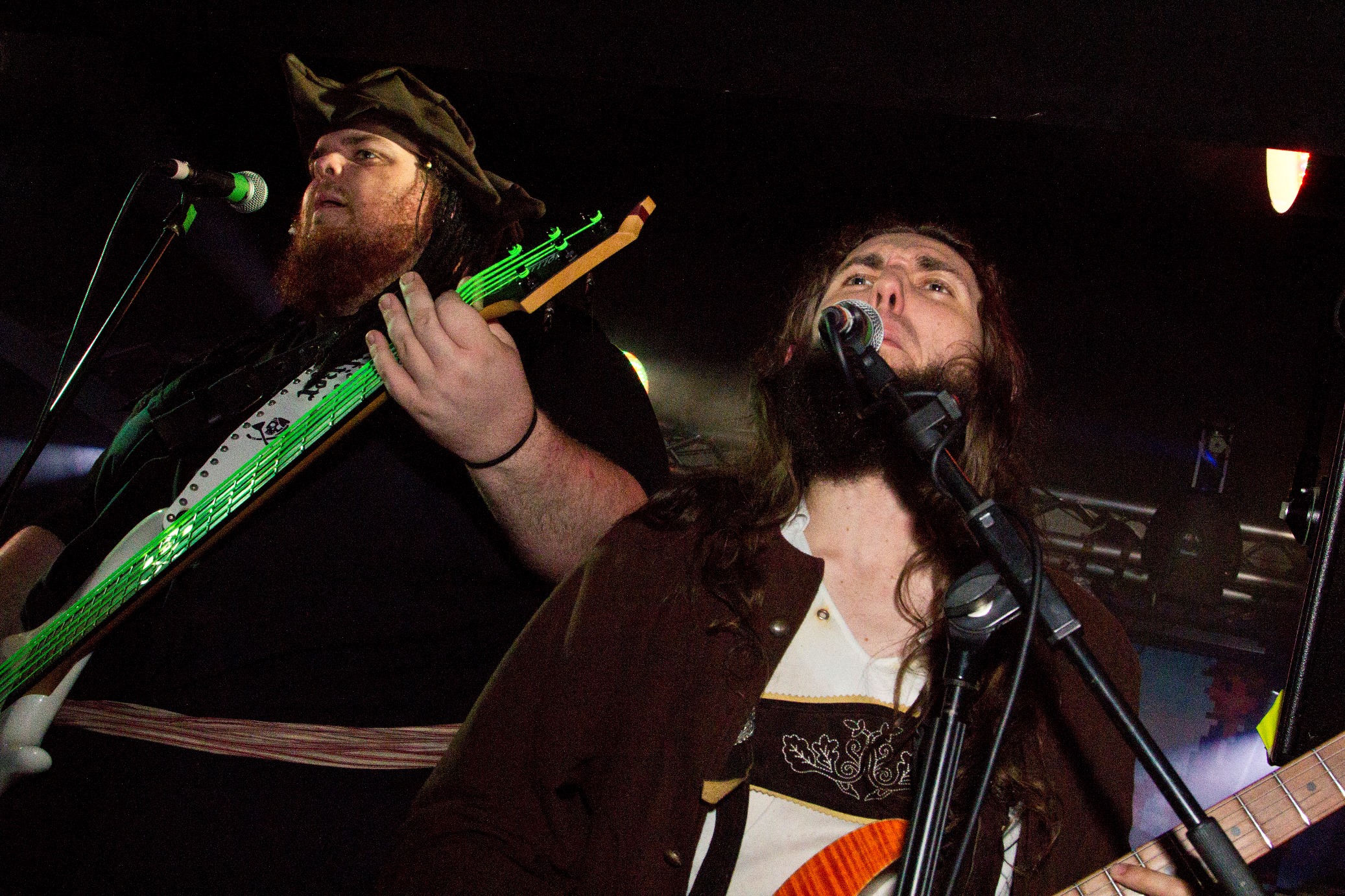 Now! I thought things were cramped on stage for RED RUM, but then the seven man crew of Aussie Pirate Metallers LAGERSTEIN take to the stage. Complete with an actual Leviathan on bass… the man-mountain simply know as ‘The Immobilizer’. So tall he had to duck down to see out into the crowd under the stepped ceiling in front of the stage. And let’s just say he is rather on the portly side to boot. They play an absolute stormer! Right from the off these lads were out to have a good time as they unleashed their rum soaked metal on the relentlessly thirsty crowd with every single drop of their set being lapped up off the floor. Frontman Cptn. Gregaaarrr!!! does a fantastic job of a keeping the already buckled crowd engaged. 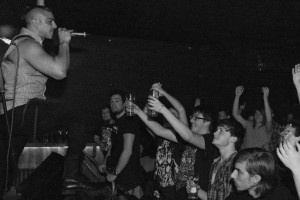 Alcoholic antics and humour is definitely high on LAGERSTEIN’s song-writing priorities, as they deliver fantastically catchy pirate sing-along shanties, one after another. ‘Dreaded Skies’ about flying pirate ship, ‘Harpoon The Sun’ about dragging the Sun into the sea because “…it makes our fucking beers warm” and ‘Sea Of Bundy’ about… well, a sea of Bundaberg rum. Towards the end of their set Gaz from ALESTORM joins the band on bass while ‘The Immobilizer’ takes on lead vocals for their version of ‘I’m On A Boat’, which I’d never heard of before but everyone else obviously did going by the sing-along that was as massive as the man himself. 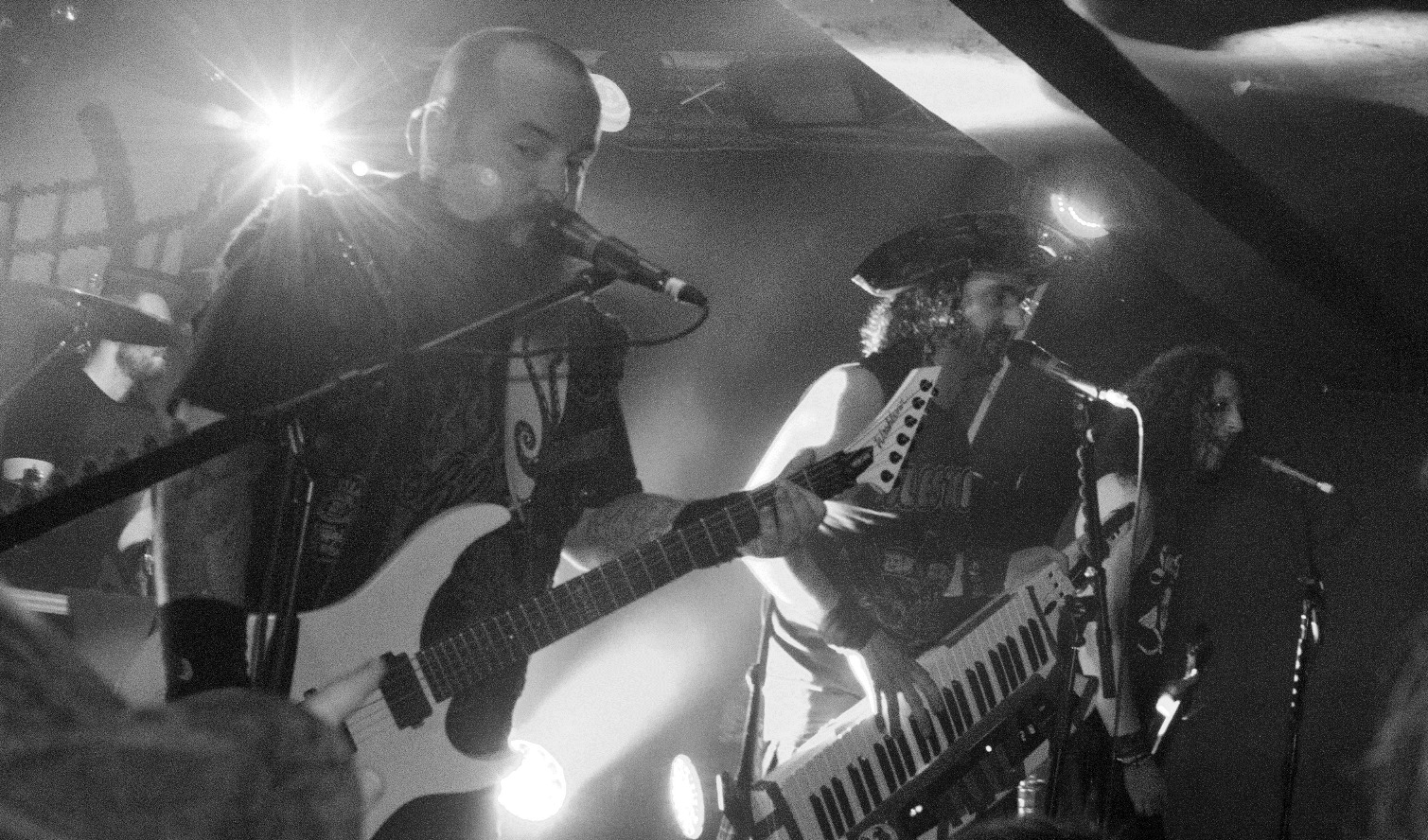 Finally! ALESTORM grace us with their presence. At this point there aren’t many sober heads left as the band take to the stage to a huge reception from a crowd eager to see one of the Pirate Metal genres leading act. The place literally explodes for the their entire set. Within minutes some poor young fella bent over in pain is being shuffled out the door by his mates after a rather nasty (stupid..!!!) encounter with the front barrier. It’s an absolute frenzy in the mosh pit which swirls like a maelstrom of sweat and hair. Some ginger fella attempts to dive off the barrier but slips and simply face-plants into the floor right at my feet. One of the funniest things I’ve ever witnessed, I nearly pissed myself laughing as the poor sap stumbled to his feet and entered the fray once more. 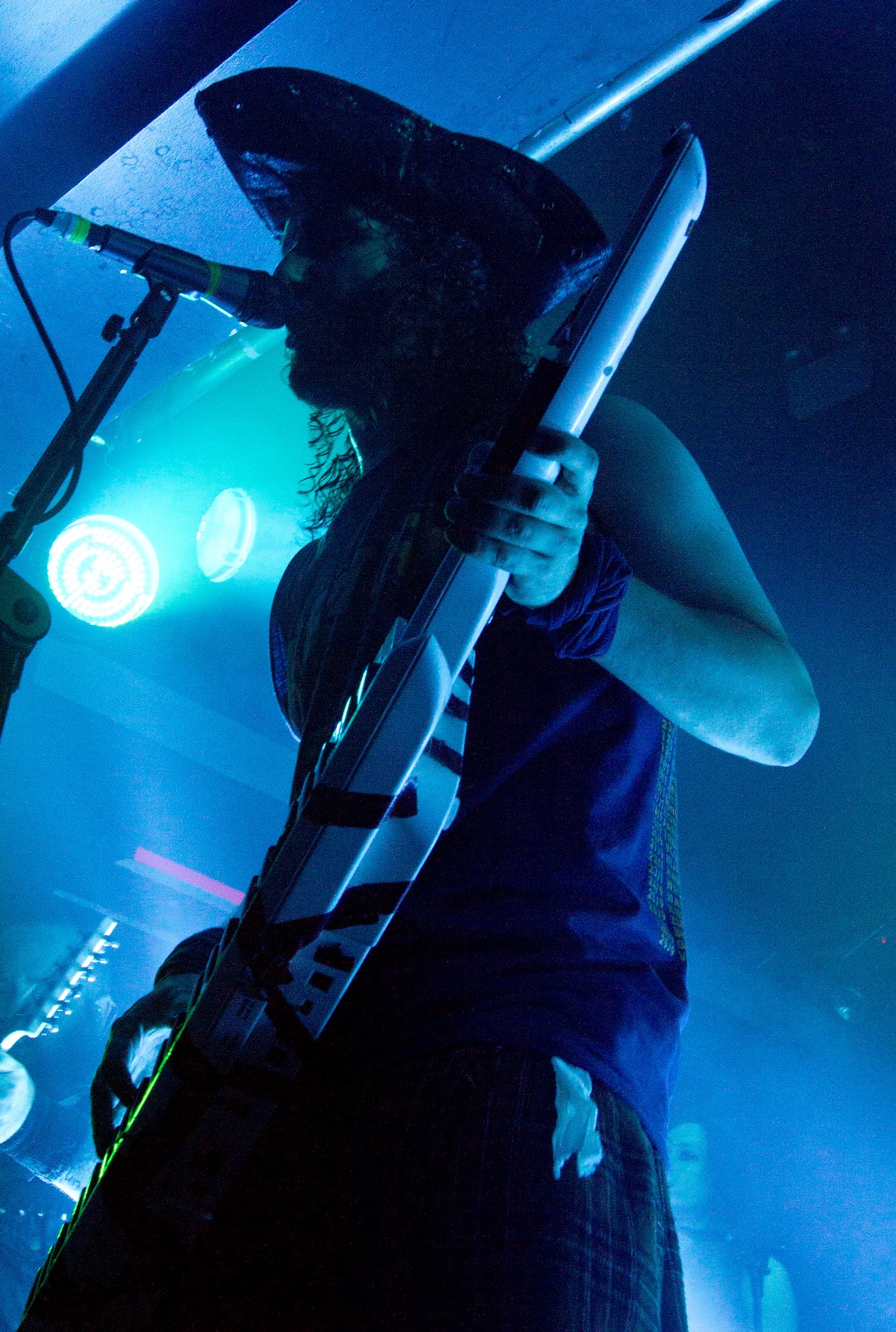 The enthusiasm and sheer fanaticism for this band is something I haven’t witnessed to this extent in a very long time. Every song delivered is greeted with a rapturous cheer as swathes of €2 plastic cutlass’ are cast into the air as the band steer their ship and take us on a voyage that only ALESTORM could helm. They churn out all the expected favourites with titles that pretty say it, really! ‘Walk The Plank’, ‘Drink’, ‘Shipwrecked’, ‘Captain Morgans Revenge’, ‘Rum’, ‘Keelhauled’… name any pirate reference and they have a song for it. Our old buddy RAINBOWDRAGONEYES makes another appearance when he invades the stage, stealing the mic from Christopher Bowes for the quick-fire and simple chorus of ‘Wooden Leg’, before falling back into the shadows as quickly as he first appeared. To add to the humour that the band dish out, a hand puppet (usually called Gary but renamed Séamus O’Monkey Bastard for the Irish crowd) is brought on to accompany Bowes on vocals for ‘Midget Saw’. And to round out the night Sam Wood from RED RUM also makes another appearance on stage along with the hulking ‘Immobilizer’ to add his enormous weight by rapping to the band’s cover version of Taio Cruz’s ‘Hangover’.

So there you have it!

Countless €2 plastic swords!!! Dodgy eye-patches!!! Even dodgier fake parrots! 8-bit Circle Pits!!! Tolkien sing-alongs!!! A sock-puppet going by the name of Séamus O’MonkeyBastard!!! And a thoroughly cracking night had by all!!!

The amount of teenagers in attendance for this gig was really surprising. Where are all these young fellas for regular local bands and why the fuck aren’t there more metal gigs with solid turn-outs and attendances like this taking place in Cork, which on any normal day is a veritable metal wasteland?