While up in our Nation’s capital to catch ENTOMBED A.D. when they played alongside VOIVOD and LORD DYING in the Voodoo Lounge last November 15th, IMA’s Philip Morrissey was lucky enough to have a sit down and chat with the bands guitarist Nico Elgstrand.

So! How are you doing? How has the tour been going so far?

Yeah everything is going well man. It’s been going good man. We have been having a blast. It’s been really great to have been out with VOIVOD as they are one of our favourite bands since the dawn of time. And LORD DYING are really crushing it too.  It’s been above expectations.

Is this the first time that Entombed have toured with VOIVOD?

Yeah. We sort of met here and there at various festivals over the years. But this is the first time we have toured together. I think it’s a really cool musical mix as well between the two bands. I think VOIVOD do something that no other band does. It’s really cool to be part of that musical context. When a band does precisely as they want to.  But I am an old fan of theirs, so I am really psyched to play with them and to witness them every night.

This relationship has been further enhanced by the release of your split 7inch? Is it perhaps more of an artistic endeavour to release something like this?

Yeah. It’s awesome. Away created the artwork as usual and it is incredible in terms of its simplicity. It sounds really cool. It has more of a joint effort feel together when you can make something connected like this. And I really like it. At least with those guys anyway. It depends of course in terms of the context of who you do it with and how it comes about. This time I think it worked really well. 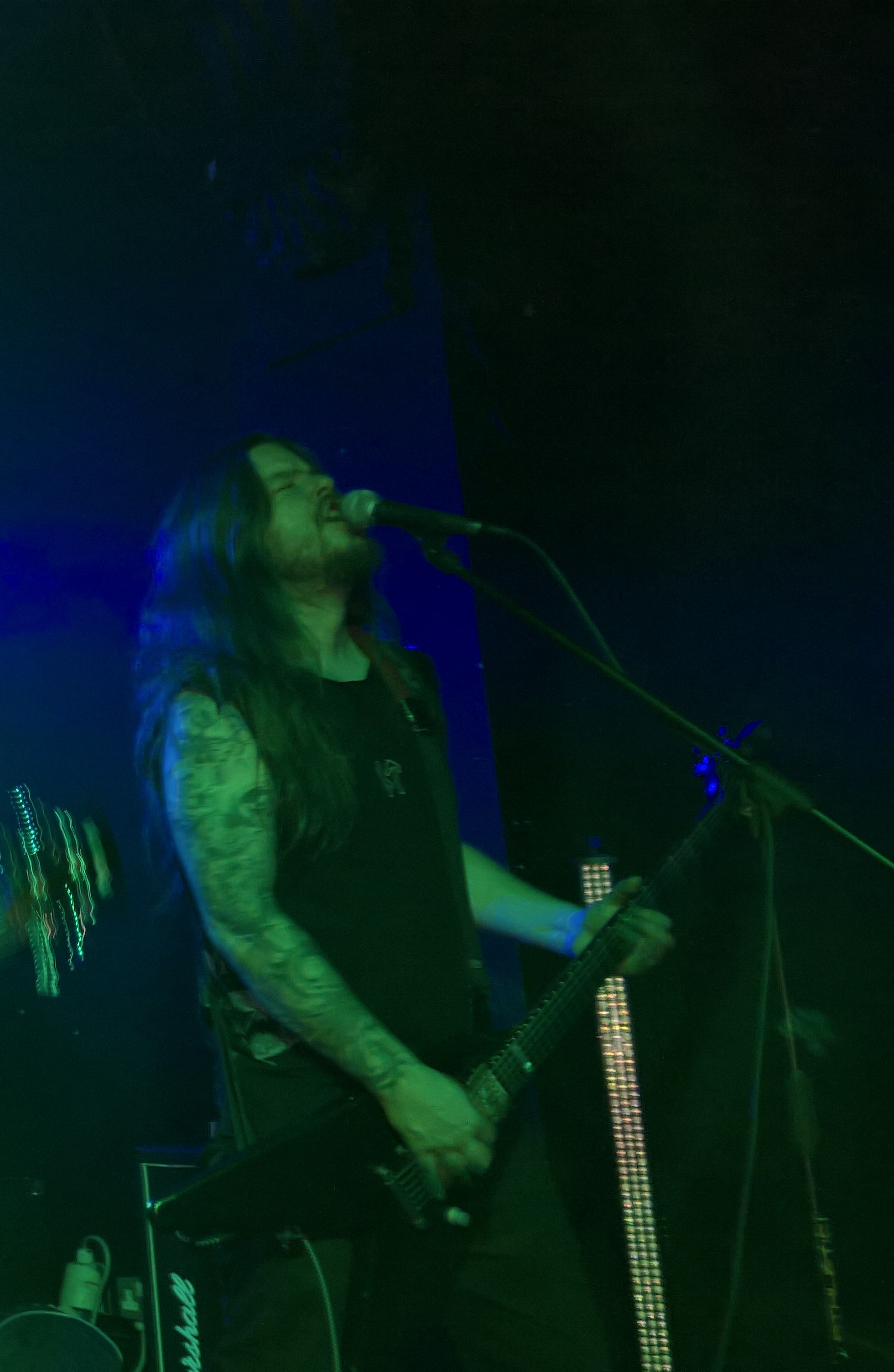 It’s been a busy year for the band in terms of touring and festivals?

It’s been insane, but it’s been really good. At times it has been exhausting but you realise that when you stay away from it for any length of time, how much you miss it. Right now we are in the middle of the tour and everyone is at the half-way mark and we had a day off yesterday. And today I am having one of those exhausted type days. On the whole I would say that it is good to be doing it properly though. If you want to do something, you may as well do it well.
Sometimes at the end of the day it is hard to describe this as your job. And the fact that we can keep on playing and go all around the world.

How does it feel seeing all the new death metal bands going back to when you were starting off in the early days?

Yeah it is cool. You see yourself all over and over again. You know the will and the complete no frigging experience to go with that. I like it. It actually revives me in a way. You feel youn when you see yourself in younger people’s behaviour. Sometimes it’s like ‘Ah just go home and sleep it off!’ but you remember how you thought you were like superman at the age of 21 or 22. About how you thought you knew everything. I just remember the enthusiasm of it all.

Swedish death metal has morphed and changed over the years and bands have gone into different sounds. ENTOMBED for example going into death ‘n’ roll. Was that ever a conscious decision?

I think if you are constantly trying to do that, even if you keep it within the terrain of what you are doing, it will help you. You should always be looking to try and push things forward myself. Even if it is something by accident, something new will always come about. If you do it from the heart, it will go places. When you find a sound or a way of communicating, people tend to stick with that. If you are following a formula it gets boring very quickly. People will listen to it and won’t respond. That’s why you can’t really follow any rules. You just have to make something that sounds as good as possible. I am sure that there are people out there who say that they can write a great song to a formula. If you don’t let yourself go on that point it is going to be hard for you. Your heart has to be in it or else it just doesn’t work.

How have you reacted to how well the “Dead Dawn” album has been received?

It’s great. I am really happy that both critics and fans seem to like it. That is an unusual one really. Normally it is one or the other. People buy it but the critics hate it. I always say that when an album gets really great reviews, it is often not matched by the sales. But it has been fantastic with this one. People across the board seem to like it. I have been really happy when we have played the songs live. They have gone down really well so far. You can only perhaps find out after a couple of months of touring which gets the best response or if you become bored with a certain one. I am happy to say that we have created some very nice physical mayhem with the new songs. People have gotten into them really well.

How is your 2017 looking so far? Have you been slotted in for any festivals yet?

Oh! Well I really don’t want to know yet! I think we are going to the States in the beginning of January for about three weeks or something. And then we are going to try and finish writing an album. There was talk about South America in April but I really don’t want to think about it yet. The ideal thing would be if we could finish off the album during those months and then go from there. And after all of that, it is festival season again. That will kick off around May or June. Hopefully nothing more than that!

I can’t remember but there has been a few festivals at least, but I can’t say right now. Also, it doesn’t stick in your head because it seems so far in the future. Its ‘okay cool’ and then go and forget about it. I need to see a schedule with all the dates on it to remember it all. We had a great festival season this time out and I am looking forward to the next one. The fact that we are touring in between is good. It means that the machine is rolling steady now.

NO! Time flies when you are having fun I guess! I don’t feel as tired as what I should be yet, so I think we are good to go for quite some time yet.