GRAVEYARD DIRT are up there with MOURNING BELOVETH as one of the best Doom/Death bands on the planet. The only problem is they move at an unbelievably slow pace. But when they do resurface and record something new, it’s always so incredibly good and impressive. Much like the Earth’s tectonic plates slowly shifting until eventually erupting. And the bands latest offering is no exception.

So on hearing that the band had recently spent some time at Trackmix Studios, once again with Mick Richards at the helm,we here at the Irish Metal Archive got very excited. You can check out the first fruits of their labour, ‘Her Haunting Smile’, streaming in the player above. We also caught up with bands guitarist Kieran O’Toole for an update on the bands new material and upcoming plans… 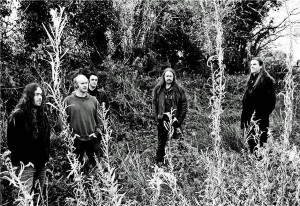 IMA : Tell me a little bit about the new track being previewed? You mentioned ‘Her Haunting Smile’ has been knocking around, in part, for over twenty years?

KO’T : That track was first written around the same time as the ‘Of Romance & Fire ‘ demo. Had we more time in the studio back then it would have been on that old demo, though it wouldn’t have been quite the same as it is now, obviously. Basically the verses and the breaks between those verses are the same riffs as the original, the start riff is different now, the quiet mid section is a variation of the original part as is the end riff. And we dropped a few other parts too to keep the flow better.

IMA : And the upcoming new EP. What are the current plans for that? How many tracks? Any artwork planned? Release dates?

KO’T : No release date for the new EP as yet. There will be three tracks, totaling twenty-seven minutes. We had hoped it would be a vinyl release but the cost of vinyl pressing may well be a bridge too far after covering the recording costs ourselves. We have been bouncing around artwork ideas, nothing decided 100% just yet, but there won’t be any castles this time around!!

IMA : And what’s next for the band? Any plans to finally get back on stage again?

KO’T : Regarding gigs… while I recognise the importance of getting out there and gigging, we’ve never been a band that has been prolific on that front. Partly due to location perhaps. Nowadays however it’s even more difficult than before for a few other reasons. The bulk of the rehearsing for the new tracks was done as a 3 piece with Paul coming on board again for the recording of vocals. If we did somehow decide to gig again then a 2nd guitarist would be a must, and I don’t see that happening if I’m being totally honest.