More SHITE news! In the same week the TWO TALES OF WOE announce their split, we now find out that GACY’S THREADS, one of Belfast’s hardest working bands have decided to cease activities also. A truly brilliant live band that delivered 110% every time the were on stage… GACY’S THREADS will be sorely missed on the gigging circuit.

“We are calling it quits for the foreseeable future, and wrapping up with two final shows. 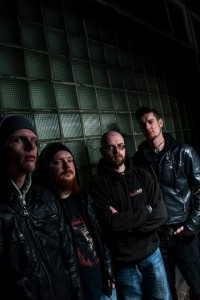 Just wanted to say a big thank you everyone and anyone who has helped booked the band over the years and supported us. All the bands we’ve had the pleasure of playing with and supporting and we’ve made some great friends on the way and had the pleasure of working and playing alongside some awesome irish bands, By Any Means / Lantern for a Gale / Sinocence / Two Tales of Woe / Murdock / Red Enemy / Five Will Die / Hero in Error / Ilenkus / Three Hour Ceasefire / Shardbourne / Death of a Salesman / Jackalfeud / Fragments and many more.

Was great to finally get a vinyl pressed and out, (even if it was just a 7″) but that was always a dream for the lads in the band.

Few of the lads are currently in other projects, 7.5 Tonnes of Beard and Altus, so who knows what else the future holds.

Cheers for the support over the years, we had a decent run.”