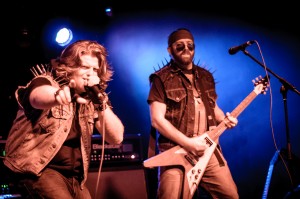 After a fantastic Summer and early Autumn the rains finally decided to come. Unfortunately! It decided to fall in torrents for tonight’s gig. And with the weather keeping practically everyone away tonight, only a small spattering of a crowd after making it in to town to catch this show.

Couple that with the fact that this was also STEREO NASTY‘s live debut, the up and coming Carlow/Kildare band had the difficult task of opening up tonight’s proceedings. Regardless! They took to the stage and set about showing what we here at the Irish Metal Archive have been raving about, and no doubt what many others soon will also. Sounding like a cross between ACCEPT and W.A.S.P. the band ripped through their short set and certainly did not disappoint at all. There was a notable lack of banter between the band and the crowd, in part due to the limited number in attendance, but something I’m sure that will come naturally with more gigs. The bands denim and spikes stage image is a be a bit fun but ultimately unnecessary. These lads don’t need a gimmick or a look and can easily just let their music do the talking. 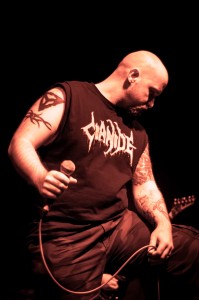 Taking to the stage like they are ready to kill you TERMINUS have a sound that hits you right between the eyes and wait for the infection to spread down to your body. Hitting notes that Rob Halford would be proud of, James Beattie assaults you like a madman possessed. Three songs in and you find yourself entranced in their sound wanting more from them. Again their set is over early but they leave an impression that they will be back for more. 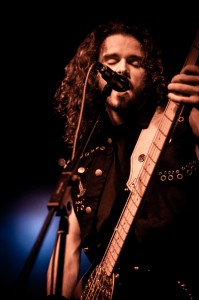 With the stage bathed in darkness, DARKEST ERA take to the stage. And as their opening intro fades out Ade and Sarah unleash their dual guitar attack upon us. They sound like a band that have been around a lot longer than they have, with a hunger and passion that many bands would kill for. It really is a shame that more didn’t make the effort to catch this show as watching them enjoy their set tonight really was something to behold.

Krum encouraging the crowd to get involved with every note and lyric blasted out. Sarah and Ade, never one’s to stand still, played every note like their lives depended on it. 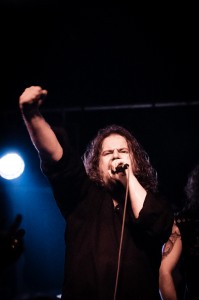 Something I haven’t witnessed since the days of Gorham and Robertson. But the one thing that really struck me about the band, even during their soundcheck, was how connected and how well the new members seem to have fitted in so perfectly, looking like they are there since the band formed. Each member bringing their own characteristic stamp to the group, but yet gelling as one to play some of the best songs this island has produced in years. It really was an absolute joy to behold.

With their setlist being mainly dominated by tracks from their latest release ‘Severenace’, they showed why they are held in such high regard across Europe and why they have such a strong fan base here and in the UK. Make no mistake about it… this was a killer set from a band that is rising, and will continues to rise for some time yet. DARKEST ERA are surely destined for bigger and better if they keep playing like this.

Before their headline set, I was privileged to sit down with Sarah and Ade for a few minutes to discuss their recent album, touring and plans for next year with them. So with a beer in hand, a secluded spot was found to conduct the following interview…

Hi guys, thanks for taking the time out to talk to us before the gig tonight.
You recently acquired two new members in the band. Was there a period of adjustment between you and them or did they settle in straight away?
Ade: The new guys settled in straight away. When we recorded the album we didn’t have a stable line up, there was really only Sarah, Krum on vocals and myself.
Sarah: Our bass player had just joined so literally test drove the songs. And we knew Lisa (previous drummer) was leaving so we knew we had to get a drummer.

With the recent release of your new album in June and with it being so well received were you surprised at all by it?
Ade: We’re really pleased with it. We weren’t too sure at the time as it’s more technical period of the band’s history and it was hard to be objective about it. But when the reviews started coming in we were really encouraged by it.

So far, it’s going good then?
Ade: Yeah, we’re really pleased to be honest. We just weren’t sure as to how the album would be received.

How are ye finding the tour going?
Ade: It’s going OK! The UK is a really difficult market . Three really good shows so far like Glasgow, Manchester and London. The rest were good too.

You also played with AMON AMARTH in the Academy recently, was the response and success of the gig the reason behind tonight’s gig?
Ade: That was a brilliant show and the timing couldn’t have been better. It was a few weeks before this show and it reminded people we are around, which was helpful. The show was sold out and the Belfast one was nearly sold out too.

That gig was my first time to see DARKEST ERA live and I was literally amazed at how tight you sounded on the night.
Ade: Tonight we’ll be playing a lot of material off the ‘Severenace’ album.

Any plans for next year with regards to a new album or tour?
Sarah: We are pretty much ready to start on a new album, this one is pretty old to us,over a year old before being released and we are really looking forward to start writing again. But come hell or high water we are looking to touring Europe. We have a very strong following in Germany, so hopefully in Spring we can play there.

Will you be looking to play festivals at all over the summer?
Ade: Maybe some smaller festivals. But we’ll definitely be playing Northern Europe next year and then we’ll be sitting down in regards to the new album.

Will you be using previously rehearsed material for it or will it be totally from scratch?
Sarah: We’ll have to sit down and discuss what we want it to be, rather than just going at it. Have an idea on what we want to create.

Finally! Any weird tales from the road?
Ade: We got into a habit of smelling weird things.
Sarah: Oh for fucks sake (cue laughter all around…)
There’s two smelly things on tour. One is Ade’s wristband for every gig. (At this point I was offered to sniff said wristband and was forewarned by Sarah that it has a rather unique smell). The other is Dave the drummer from ANCIENT ASCENDENT who are brilliant. His shorts got smellier day by day.
Ade: He was pretty insistent that we smelled them everyday.
Sarah : And he threw them into our van.
Ade: So they’re here now in spirit and on stage with us.

At this point the guys wished to thank the fans for their support as we winded the interview down. Really great guys who I wish all the success that comes their way. 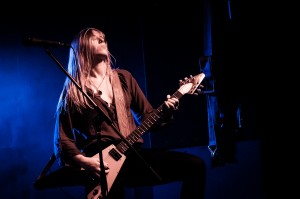